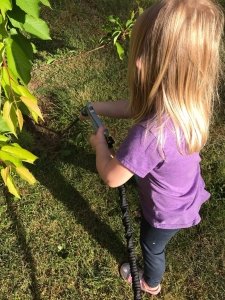 When kids argue about whose turn it is to do chores, usually it’s because they’re trying to get out of something they don’t want to do. But at Ashley Smith’s house, it’s the opposite: her seven-year-old son and two-year-old daughter quarrel about who gets to water the garden.  They love to help!

Vennessa Medford understands. Her three-year-old continued to insist that it was time to water the garden long after summer had ended.

You would be justified in wondering what’s going on here. The secret ingredient is the WiserWand, a tool that was invented by Olympia resident Tom Ryan to help gardeners save water but that also has some unexpected benefits – such as making watering fun for kids.

Smith’s children love to be involved in everything she does, a characteristic she encourages, but she had some concerns about letting them loose in the garden. Her fears proved ungrounded once she introduced them to the WiserWand. “It gave me a chance to teach them the right way to do it. The water got straight to the roots and they weren’t just spraying water all over.” 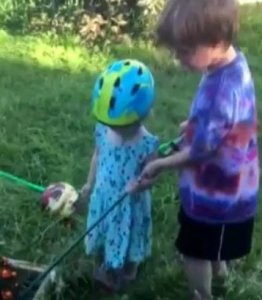 Medford’s daughter started with a watering can before graduating to the WiserWand. “She gets in there and squeezes it if she’s watering a tree or a bush,” says Medford. “She always asks if she can water.”

Learning happens organically, according to Smith. “It’s been important for my kids to see that the baby plants

were growing without spraying water everywhere,” she says. “It’s been an educational experience for all of us to see how different plants take in water.”

The wand has also yielded other benefits, says Medford. “Before I met Tom, it would take me an hour to water the garden. Now with the Wiser Wand it only takes about 20 minutes. Every year I was getting leaf rot on squash and was watering my tomatoes either too much or not enough. With the Wand, I don’t have a problem with slugs, snails or aphids like I’ve had in previous years and I have fewer weeds.”

Another bonus is, of course, saving water. “I could tell a difference the first time I used it,” says Medford. “Even with 100-degree weather, I didn’t have to water every day. In normal temperature spans, I watered every third day. I had plants producing food much later in the season this year. This is the best thing that’s happened to me gardening wise.” 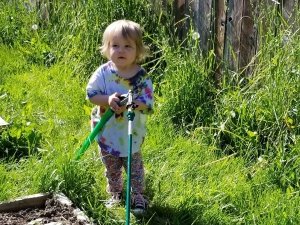 Smith’s son attends Roosevelt Elementary, which currently has a community garden. “They’re going through a renovation, but irrigation issues are holding them up,” she notes. “I’d like to expand the use of this to our local school.”

In general, she believes the WiserWand can play a role in educating kids about conservation. “We’re giving plants only what they need, and the water is getting right where it needs to go,” she says. “It’s important that children understand the importance of water.